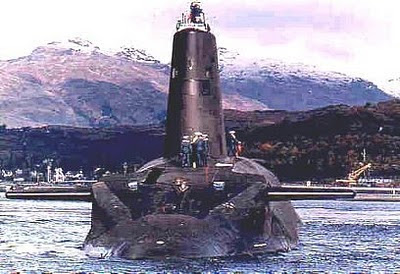 The Trident Ballistic Missle Submarine was front and center in another Vatican attempt to quash progressive Catholic dissent against US military policy. Doctrinal orthodoxy was also the excuse under which this battle began. It didn't end there though.

The following statement according to Maryknoll priest, Fr Joe Veneroso, is the Maryknoll General Council's official position on the matter of withdrawing funding from SOA:
On May 24, 2010 Father Edward Dougherty, Superior General of the Maryknoll Society, met with Father Roy Bourgeois to discuss the Society's decision to discontinue financial support to the School of Americas (SOA) Watch.

Given Father Bourgeois central role as founder and public face of the SOA Watch, Society leadership has determined that it cannot continue its financial support of that organization without giving the impression that it also supports the actions of its leader concerning the issue of women's ordinations. (Those actions led to his automatic excommunication [Latae sententiae] by the Congregation for the Doctrine of the Faith in 2008.)

This decision is not intended to be punitive and is not designed to put pressure on Father Bourgeois, or on the SOA Watch organization and its activities. Maryknoll continues its solidarity with the people of Latin America and the Caribbean, and is unambiguous in its support of the goals of the SOA Watch. (This is too funny.)

I am having a very difficult time swallowing this tripe of an official response from the Maryknoll General Council. Something stinks to high heaven about this. It's bringing back memories of John Paul II's and Cardinal Ratzinger's attempts to corral the authority and voice of Archbishop Hunthausen of Seattle during virtually the entire Reagan administration. Actually, now that I think about this conflict between Rome and Archbishop Hunthausen, the lessons in it are ripe for review and very pertinent to today's Church.

This story of the Vatican vs Hunthausen includes some of the opening strikes in most all of today's hot button issues. Not surprisingly it also includes some of today's main characters. As an example here's a quote from Joseph Ratzinger as head of the CDF, directed to Archbishop Hunthausen's handling of a particular Catholic population:

"The Archdiocese should withdraw all support from any group which does not unequivocally accept the teaching of the Magisterium concerning the intrinsic evil of homosexual activity. This teaching has been set forth in this Congregation's Declaration on Sexual Ethics and more recently in the document, Educational Guidance in Human Love, issued by the Congregation for Catholic Education in 1983."

Archbishop Hunthausen was a prominent leader of the progressive wing of then NCCB. He once stated in a speech that the Trident Nuclear Submarine base outside Seattle was the Auschwitz of Puget Sound. He did not endear himself to the Reagan White house with his outspoken dissent with St Reagan's nuclear arms build up. He refused to pay the portion of his personal income tax which went to the defense budget. Needless to say he had meetings with the IRS as well as the Vatican. It was Hunthausen's opposition to Reagan's arms build up which most observers felt triggered the conflict with Rome over Hunthausen's lack of 'orthodoxy'.

The supposed trigger for Rome's investigation of Hunthausen were the complaints of a right wing conservative group, Catholics United For The Faith, whose current honorary chairman is--are you ready--Archbishop Raymond Burke. Their headquarters are in Steubenville Oh, and they have a very active chapter in Colorado Springs, Co. Shock and awe. You can probably connect some dots.
CUF objected to Hunthausen's pastoral leniency on matters of divorced and remarried Catholics, lay participation in the Sacraments, the pastoral outreach to gays, practices in Catholic hospitals surrounding sterilization, and use of laicised priests for some sacramental functions. Rome responded with a CDF led Apostolic Visitation under the then Archbishop James Hickey of DC who later became Cardinal Hickey. In 1985 the CDF responded with a letter outlining certain changes and JPII appointed Donal Wuerl as an Auxiliary Bishop with a mandate to take over some of Hunthausen's Episcopal authority.

That's when it really got fun because Hunthausen maintained Rome stepped on his independent authority as the installed head of an Archdiocese. All of a sudden this wasn't an issue of orthodoxy but an issue of episcopal authority vis a vis Rome. Needless to say this got the interest of the NCCB, who could see some ominous signs about the extent of their own authority.
The dispute was finally settled in 1989 when the Vatican restored Hunthausen's full authority and appointed a coadjutor archbishop, Thomas Murphy, who took over upon Hunthausen's retirement two years later in 1991. Archbishop Hunthausen, who recently turned 90, lives outside Helena, Mt and still fills in when needed. To the best of my knowledge he is the last living US bishop who took part in the entirety of the Second Vatican Council.

The following excerpt is the final paragraph from a study published on the University of Utrecht website by Timothy Peter Schilling. The study analyzes the conflict strategies and use of power in the Hunthausen/Vatican conflict. The entire 364 page study is on line and for those with nothing to do this weekend it might make interesting reading. Schilling makes a lot of good points, one of which is that Catholicism has no real appreciation for and finds no value in conflict and because of that, doesn't know how to deal with conflict situations or take any lessons from them. In the interests of the facade of unity, conflict amongst official representatives isn't supposed to exist. To maintain the facade any strategy which minimises or hides these conflicts is preferable to the truth. Secrecy is one of the big strategies:
"One of the main points I make in my study of the case is that, while arguing for an “open
Church” – for transparency and broad participation in the leadership of the Church –
Hunthausen himself remained complicit, off and on, in the restrictive practices of silence and secrecy that he himself argued against. I believe this proved to be the case because Hunthausen was so strongly socialized to do so (thus, it was to a degree a matter of unconscious habit), and because ultimately he realized that he could not say what he wanted to say and change what he wanted to change and still remain in the hierarchy.

I cannot help but feel that on some level Hunthausen knew all too well that the self-protective mechanisms of the hierarchical culture – which are fully operative when Church conflicts of interest arise – pose a danger to the credibility of the hierarchy and to the viability of the Church.

One need only look as far as the recent crisis around the issue of pedophilia to recognize the calamity that comes when bishops put the appearance of the Church and of the hierarchy ahead of the open and honest acknowledgment of real problems. My sense is that Hunthausen felt himself to be, to some extent, trapped within structures that he could not see a way to change and that he felt frustrated as a result. I do not imagine him to be alone among bishops in feeling this way.

I'm pretty sure the Maryknoll General Council feels the exact same way Archbishop Hunthausen probably did. Frustrated with the whole system but conditioned to participate in and enable it, and in their case devoid of Hunthausen's courage to defend their own mission. So good bye SOA and hello duplicitous ass kissing statement. It's just one more example of the kind of power games-some of them obviously political- which have become institutionalized in the Vatican under the past thirty years of the JPII, Cardinal Ratzinger/Benedict XVI Vatican. This is why the same names and same issues of orthodoxy are still in play twenty years later, and seem to be even more effective.

In my estimation the most depressing and potent messages sent by Rome in the Hunthausen affair were: 1) Rome's treatment of the progressive Hunthausen coupled with the promotions and career advancement of men like Hickey and Wuerl, 2) the reinforcement and pandering to groups like CUF and 3) the availibility of the Vatican to be bought by fascist or conservative governments. The treatment of Hunthausen should not be understood as separate from the treatment of Archbishop Romero.

Hope in the Hunthausen saga can be taken from the fact that Ratzinger's Vatican will blink in the face of determined, principled opposition --especially if it has public lay support. If only there was just some sitting bishop who understood this and had the guts to test this theory. There is no shortage of potential lay support for such a stand, just bishops willing to take one. Maybe someday, somewhere, some bishop will be thoroughly sick of being embarrassed by this kind of Vatican manipulation and will find his voice. One can certainly pray such a thing comes to pass.