I Am Gob Smacked As They Say Down In Oz 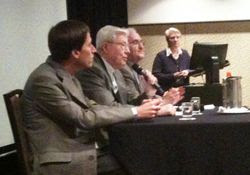 Bishop Geoffrey Robinson and friends struck a spark and got a fire going at Australia's National Council of Priests annual meeting.


Is the Australian National Council of Priests ready to blow up the world?
15/07/2010 - ABC Australia - Noel Debian
Too much discretion? What was I thinking?!
If there really was any pulling of punches early on in this week's National Council of Priests conference, the gloves were well and truly off by the third day. Though I have heard much of what was said before in other places, I have never heard it all said in front of 250 Catholic clergy and several Australian bishops. I have never heard it said so strongly or clearly. I heard calls for a third Vatican Council, married priests, discussion of women priests, warnings of church implosion, calls for cardinals to be elected by bishops, as well as public criticism of Cardinal Pell’s appointment to Sydney. That was just for starters. At one point I leant over to a Bishop – not noted as a progressive radical - and asked if I could check his pulse. He had the good grace to laugh, though I am not all that sure he was feeling all that jocular.
Many of these issues would cause more conservative Catholic friends to tear their clothes and strew ashes over their heads – immediately before delating the whole meeting to Rome via flaming email. On the other hand, progressive Catholics would have been delighted. I am still gobsmacked at what I heard said. The trick of course is discerning whether this is all just steam being let off, or whether it is the enormous glacier of the Catholic church loudly cracking.
I’ll let the words stand for themselves, beginning with a few highlights from Bishop Geoffrey Robinson and Donald Cozzens :
On celibacy:
“In the most male dominated civil society, at least men have a woman at home to have some influence on them. In the church, not even that is present.”
On clerical sexual abuse:
Bishop Robinson: “ I have listened to any number of offenders and I have heard their unbelievable rationalisations: ‘I was loving this boy. I never loved anyone more. This was doing what Jesus said.’ Incredible rationalisations….”
Bishop Robinson: “You see every bishop takes an oath of loyalty to the pope. And yet from the time it first came to our attention in the mid 80’s right though to 2004 – twenty years- Pope John Paul said next to nothing. And the loyalty of bishops was to a silent pope and so they became defensive – whereas had the pope in 1985 come out and said “this is a terrible blight on the church, we’re going to confront it, obliterate it from the church”; then the very loyalty of the bishops would have worked in favour of victims, whereas in fact it worked against them: a culture of secrecy.”
Donald Cozzens: “One of the first things we might consider doing in terms of challenging the dysfunctions of the church is … to try to make the commitment not to be an enabler….There’s something about the structure of the church that keeps adult men like ourselves less than adult.
On a more representative church government:
Bishop Robinson: “Most bishops would be in favour of the bishops electing the Cardinals…….. Everyone in this room knows very well that George Pell was transferred from Melbourne so he could get the red hat so he would become an elector of the pope. And that was the sole reason. And that has happened in many other parts of the world. So it’s a vicious circle. And it is deliberately designed to ensure we do not have another Pope John XXIII”
Sustained and loud applause from 250 odd priests followed the bishop’s words.

This particular group of priests represents the average type in the trenches parish priest. These are the priests who have toiled quietly, while apparently smoldering. This is also the largest gathering of this organization ever. It was supposed to be Australia's gathering for the Year of the Priest. I don't think Pope Benedict had this in mind since I don't see any references to St. John Vianney. All I can say is WOW.
Maybe this really might be "the enormous glacier of the Church loudly cracking." What a week, first South Africa's Bishop Kevin Dowling lays it on the line, then Argentina passes gay marriage and adoption rights against huge Church oppposition, and now a national priests council finally speaks out. Last and maybe most importantly, one of my hero's, Bishop Geoffrey Robinson, speaks the unvarnished truth about Episcopal appointments like George Pell and what exactly they are really intended to accomplish. It isn't pastoral ministry.
I'm really beginning to wonder if the spark has been lit which will get the fire going. It's beginning to look like Benedict's summer vacation is not one he is going to want to write home about. Rather, it's beginning to look like one long summer of open discontent.
For readers looking for more on this meeting of Aussie priests try here and here.