What About The Future Of Catholicism? 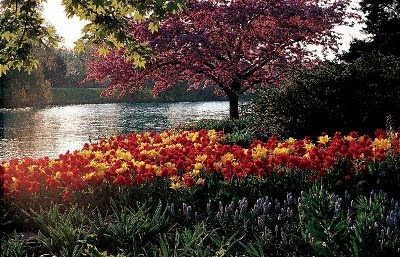 The Catholicism of the future will bloom in it's uniqueness because it understands it shares and is connected to the greater spiritual soil which supports all of God's creation.
The blog Patheos is running a series of articles this week on the future of Catholicism. It's worth investigating because the writers who have been chosen to present their thoughts do represent a fairly wide spectrum of Catholic thought. In the spirit of this enterprise I have added a feature on side bar asking this same question for soliciting reader input. I'm kind of mulling over some changes for the blog, directed at enhancing comments from readers and giving the really thought provoking ones more exposure. The new side bar feature is step one.
In the meantime I personally resonated with the article written by Tim Muldoon entitled Mysticism and the Community. The following excerpt is describes Tim's ideas of why Catholicism is important and where the mysticism of the individual intersects with the practical needs of community.

A Catholic Church is necessary today because the globe's problems must be addressed by a global institution. It certainly won't be corporations that do this kind of kingdom building, since they are too concerned with the bottom line. Nor will it be nations, all of which (our own included) tend to get a little too caught up in various nationalisms, wars, and economic issues. The Catholic Church was the first truly global institution, so it's had about four hundred years to practice what globalization entails.

Don't be fooled: the Googles and Microsofts of the world may claim to be multinational corporations. They make good products and yield dollars for shareholders. But they have nowhere near the complexity of the Catholic Church's 1 billion-plus members, spread out with thousands and thousands of parishes, hospitals, schools, retreat houses, orphanages, refugee services, religious orders, and so on, speaking any number of languages. What will drive tomorrow's Catholic mystics to participation in the institution of the Church (and its accompanying bureaucracy, the Vatican) is the recognition that real solidarity among the peoples of the earth will require a serious commitment to Jesus' command to love the neighbor -- that is, to actually build structures of mutual support from places like Manila to Montevideo to Montreal to Mogadishu.

Of the two, the second movement is harder for the contemporary mind to digest. We think mysticism is kind of sexy -- it's about trying to be deeply serious people on very serious quests for truth and spiritual fulfillment. But if those quests are to end in something more than a rather bourgeois self-satisfaction, they must run the route of confronting the hard realities of a world whose history is often sad and whose present reality is often hard to swallow.

The questions that Catholics of the future will face are these: am I content to shape my life around the desires generated by the culture around me, or am I willing to shape my life around the Beatitudes? Will I make life choices about relationships, about money, about power in imitation of people most like me, or out of a conscious attempt to promote justice, especially for the most disenfranchised of the world? Am I willing to risk my life on the words of Jesus, even when I have much more to lose than do the millions of poor with whom I approach the table of the Eucharist? Who, in the end, is my neighbor?

The above is not just the challenge of the Catholic world, it's the challenge of all spiritual and religious systems. It's also the universal message being given to mystics and spiritual seekers of all persuasions. When I think about this idea of the future I think it's sometimes important to discuss what might be the road to extinction. In that vein then here are some of my thoughts:

--The road to extinction emphasises our differences for the sake of promoting internal religious identity.

--The road to extinction emphasises unique doctrine as absolute truth at the expense of learning from others or seeing truth in others.

--The road to extinction emphasises fear over love, obedience over compassion.

--The road to extinction emphasises adherence to external authority over internalizing and integrating religious insight in one's conscience.

--The road to extinction emphasises ritual as an end in itself instead of a means to support the individual in his or her relationship with the Creator, with each other, and with the greater reality.

It doesn't take much of a search through the Gospels to find stories or statements of Jesus which confirm the above attitudes are not of His kingdom. Maybe the bigger question is why has Catholicism progressed through parts of two millenia as if these are part of His kingdom? It's also striking to me that periods of reform have come at the prompting of some of our greatest Catholic mystics, not at the prodding of our hierarchical authority. It's the prophets and mystics who have called the Institutional Church back to some semblance of what Jesus taught, of what His graced presence actually means for the Church and the entire People of God. That graced presence is not about propping up Vatican authority or worldly power. It's about His relationship with little ole you and me. It's not about being on the other end of a direct hot line to the Papacy.

In fact it's sometimes about reminding our leadership that they are not in fact more important than the people they serve nor the Communion of Saints and Angels. They are in fact supposed to be in service to both, not using both as means to their own ends. This final fact is the real reason I see the Vatican and the representation of their idea of a clerical system imploding. That hardly means Catholicism itself will circle the drain until it is no more. The mystics and seekers will see to it that doesn't happen, and many of those mystics and seekers will not even be Catholic or Christian. That doesn't mean they won't be Jesus people or Jesus followers. They just won't be conventional, traditional, or historical religious Jesus followers. And yet, on a very fundamental level they will understand what Jesus was all about and what He taught-- and those things are universal in a truly Catholic sense.