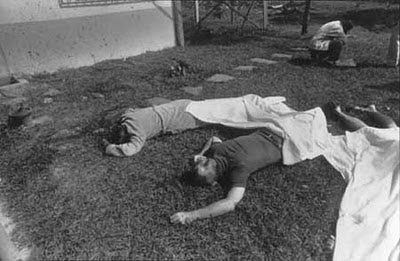 Salvadoran Jesuits who were murdered by graduates of the School of the Americas. And yet the Maryknoll community appears to be more concerned about live priests who ordain women.
From the NCR blog as reported by Heidi Schlumpf:

The Maryknoll Brothers and Fathers have withdrawn their long-standing commitment to funding the School of the America's Watch because its founder, Maryknoll priest Roy Bourgeois, supports women's ordination, reports SOA Watch.

The order previously contributed $17,000 a year to the organization that seeks to close the U.S. Army School of the Americas (or Western Hemisphere Institute for Security Cooperation, as it has been renamed). Graduates of the combat training school located at Fort Benning, Georgia, have been implicated in the torture and murder of educators, union organizers, religious workers, student leaders, and others who work for the rights of the poor in Latin America.

SOA Watch is asking supporters to help make up the lost revenue by donating $17 a month for one year.

Call to Action Executive Director Jim FitzGerald "is "disappointed in the decision that will affect not only the SOA Watch staff and programs, but the people of Latin American who work in partnership with SOA Watch to protect their families and communities," he said in an email.

Bourgeois had been involved with the Roman Catholic WomenPriests organization, which ordains women as Catholic priests.

One can't help but wonder if this decision by the Maryknollers was related to the recent controversial announcement from the Vatican which appeared to put the "serious crime" of women's ordination in the same category as the sexual abuse of minors. I hope not.

Here we have another case in which the sacramental crime of ordaining women supersedes the grave moral crimes for which students of the School of the Americas have been convicted by their respective countries.

I had just finished reading Gene Kennedy's latest post for the NCR when I came across the above article. The last sentence in Kennedy's piece immediately came to mind:
Meanwhile, Vatican II Catholics may well follow the advice my psychiatrist wife and I give to healthy people when they are put upon by the unhealthy: Repeat at least twice a day, "I am not the one who is crazy here."
Gene Kennedy's entire piece is just wonderful. In it he compares Eric Sevareid's description of the behavior of France's elite ruling classes as the German blitzkrieg squashes France like a gnat with the Vatican curia's current behavior. There aren't enough medals for French generals trying to pretend nothing really happened or long enough cappa magnas for Cardinals who are attempting the same delusional strategy in the face of their plummeting stature in Catholicism.
Actually Kennedy's article is both wonderful and truly sad. I suppose this is so because it is an accurate metaphor. A person does reach a point in which the crazy behavior of others finally just makes you sad because you know there is no meaningful reality in what is essentially irrational logic. The Maryknoller's are not addressing meaningful reality with this move. They are defending irrational logic because they think it protects their own status, but at the same time they are tragically working in direct opposition to the commands of Christ. This is all akin to French commands to hold the Maginot line when German tanks were thirty miles outside of Paris.
I wonder how much longer it is going to take our hierarchy before they truly begin to understand the rank and file are no longer bowled over by their 'divine' right to rule or their 'divine' ordained status. Until that happens, and it may never under this papacy, the embarrassing crazy behavior will undoubtedly only get worse. Like Sevareid's French generals, eventually they will be inviting reporters to their own gaudy lunches where they fete themselves because there won't be anyone else left to care.