This Is A Very Good Question 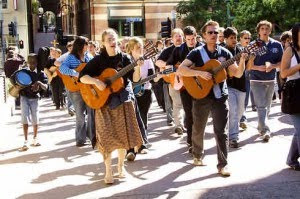 Given the number of Redemptoris Mater seminaries, the Neocats have done well strumming for dollars and conversions.

The Archdiocese of Denver recently ordained five new priests bringing the total to 58 men commissioned to serve in Northern Colorado who had been trained in its own two seminaries. Based upon the 2000 through 2009 annual reports and articles appearing in Archbishop Charles Chaput’s weekly newspaper, the Denver Catholic Register, over $70 million in donations has supported the two schools since they were opened in the late 1990s. Granted, more than half of that total is construction costs which will not be repeated again. There is an element of continuity, however, since $7.9 million has been spent on new building since 2008 and doubtless more improvements will be made in the future. On the other hand, there were no financial reports published for the seminaries until the year 2000, so the total of $33.5 million in contributions to operate the schools is missing several years. In any case, the point is that benefactors are willing to invest an enormous amount of money to maintain an all-male, ordained priesthood. Since so many deacons, religious brothers and sisters and members of laity are more than qualified to administer a parish or diocese, why are the US bishops’ supporters willing to shoulder such a financial burden to keep celibate clergy in control?........

Good question Betty, why has 70 million been spent in one diocese to ordain 58 men in twelve years? This is about five men a year at a cost of about 1.2 million per priest. This brings up another question, why does the Archdiocese of Denver have two seminaries? After doing some research what I discovered is that the Archdiocese has two seminaries under the control of Archbishop Chaput. One seminary, Redemptoris Mater, is an international seminary under the auspices of the Neocatechumenal Way. It accepts candidates from any diocese in the world and can be assigned by Archbishop Chaput to his diocese or any other diocese in the global church. It is misisonary in it's outlook but technically ordains diocesan priests.

Cardinal Pio Laghi, then prefect of the Congregation for Catholic Education and head of the Vatican Interdicasterial Commission instituted by Pope John Paul II to study the grave scarcity of priests in some areas, acknowledged in the Italian edition of L'Osservatore Romano, March 15, 1991:

There are currently somewhere around 70 Redemptoris Mater seminaries world wide and about one million Neocats. Like other 'ecclesial' movements such as Opus Dei and the Legionaires, the Neocat leadership is permanently in the hands of it's founders, the Spanish artist Kiko Arguello and Spanish theologian Carmen Hernandez, until their deaths. This link will take you to a positive review of the history and place of the movment in today's church.

Along with Focolare and Communion and Liberation, the Neocats have enjoyed the vociferous support of the papacies of the last thirty years and were especially favored by JPII and now Benedict. There are a number of reasons for this preferential treatment, but one of the biggest is they all place obedience to the Papacy as a primary tenant. This is obedience to the papacy and their own internal leadership, not the local bishop or parish priest. Another is they all tend to see sex, marriage, and family from the view of traditional sexual morality. In the case of the Neocats this has included advocating against any form of birth control, even NFP, and for Focolare, celibacy is the only way to go if one is seriously looking for a spiritual relationship.

And last, but not least, they all generate lots of money which is never subjected to any real accounting very much in the same vein as the Legion. In the case of the Neocats, their constitution states that all their assets are property of the Vatican and the Neocat movement itself has no property. It is pretty easy to see where the 70 million for Denver's two seminaries may have come from, but not necessarily who it came from. The money becomes sort of mind boggling when you consider the Neocat movement has 70+ seminaries with an estimated 2000 priests in formation.

I can easily see where these groups are incredibly attractive to the Vatican, but not so much on the local level---unless, like Archbishop Chaput, the local bishop is a participant in this particular Vatican loop. Then it appears it's a very lucrative and career advancing loop for a bishop and a certain dead end if a bishop works actively against any of them.

I encourage my readership to read the totality of Betty Clermont's post. Betty deals with the issue which is really at the heart of these fairly recent ecclesial movements and that's the money issue. While their numbers may still be somewhat insignificant in terms of the totality of the Catholic church, there influence is way beyond their actual numbers. That seems to be a consequence of the numbers of dollars and priests they generate. The exact same reasons the Vatican did not and has not disbanded the Legionaires or their leadership.

What bothers me the most about these groups is what they do under the guise of spirituality. It doesn't appear any of them actually foster an adult spirituality separate from the personality and thinking of the founder. In every single case, the teachings of Jesus are secondary to the founder's interpretation of those teachings. Too many times this is masked behind the facade of the founder's obedience to papal and magisterial authority. The truth in practice is that their obedience to magisterial authority is only extended to those bishops who invite them into their dioceses and go along with them.

All of this amounts to the Vatican fostering a parallel structure inside the Church itself which is well funded and quite capable of regenerating itself permanently through it's various seminary systems. No wonder Benedict is adamant about no changes in the priesthood. Serious changes would just mess with a good thing. It also makes me wonder if the Vatican really gives a damn if Catholicism mostly dies off in the West in terms of numbers. They may feel that they still control a huge chunk of the numbers which really count. Those would be dollars, something these new groups have proven they can evangelize. Which then leads to the real question, what makes them so attractive to big donors? I suppose we'll have to wait for the next big Vatican banking scandal to find out.