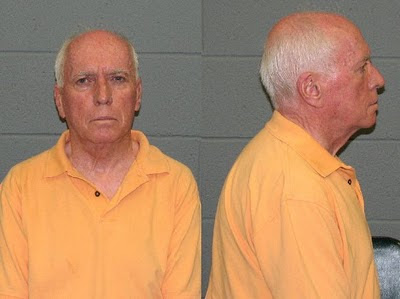 This time the clerical offender is accused of embezzlement and theft. Like with other clerical offenders the Archdiocese of Connecticut seriously failed in it's supervisory capacity-- and did so for seven years.

It seems the military is asking for email responses to the thought of gay and straight soldiers showering together. I'm like haven't we all been doing that for forever? My thoughts were never concerned with possible lesbians in the shower with me, they were concerned with the thought that anyone was in the shower with me. I was a good Catholic girl and if we had been allowed to, I would have showered totally dressed. Of course that has nothing to do with orientation and everything to do with a warped sense of modesty. Once I got over that I didn't care who was in the shower with me. I was usually hot, sweaty, and totally unconcerned with things sexual. I can't think guys are much different. Personally I'd be far more concerned that the soldier next to me knew how to use his/her rifle and had my back.
I see where Michael Sean Winters has finally given himself permission to see that LifesiteNews is a propaganda front rather than a news service. Good for him. If MSW keeps going on this track he might just begin to put a few things together. Things like too many of the self described centrist Catholic writers are really espousing watered down versions of the political right and not defending core Jesus teachings.
The Vatican is to come out with new norms for dealing with clerical abusers. They are not new exactly, but the fact they are being issued at all is probably a bigger statement than it would first appear. In a New York Times article this point was made:
"The changes are not expected to include adoption of the “zero tolerance” policy used by bishops in the United States and elsewhere, which remove a priest from ministry at the first credible accusation of abuse, as some victims’ groups and critics had hoped.
But in the quiet battle raging deep inside Vatican City, they are likely to appear as a defeat for the many traditionalist members of the hierarchy who believe that anything short of a full canonical trial betrays the church’s trust in a priest and deprives him of due process."
This is a bigger issue than it would first appear because the hierarchy has universally operated on the notion Canon Law superseded civil law in cases of clergy malfeasance. They were allowed to get away with this for a very long time by the very governmental judicial systems which should have put a stop to it. It now appears Canon Law will only supersede governmental law in the one place where they are more or less one and the same, and where Ceasar is also God--the Vatican City States. To the traditionalists this represents a curtailing of their influence on an epic scale and the raid in Belgium just underscores this loss of influence and unwarranted protection. I would imagine there is more than one Cardinal/Archbishop having heart palpitations over the treatment of Cardinal Daneels. It seems the Cardinal could move from being a witness to being a suspect.
Finally we have another story about the other transparency issue in the Church, that of financial malfeasance. Somehow a Connecticut priest was able to embezzle some 1.4 million dollars from a parish over the space of seven years. Somehow said priest was able to operate without the over site of a legally mandated parish financial council, or filing mandated annual reports to the Archdiocese. It was a nice lucrative gig while it lasted. What interested me about this case is the sense of entitlement the accused priest conveys, an entitlement that apparently included zero supervision. Haven't we seen that same thing fueling some other crisis in the clergy?