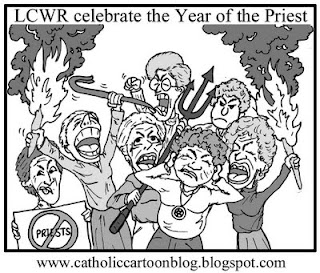 It does seem that some of the USCCB, and especially the American Cardinals in Rome, have a politically vested interest in making this caricature of the LCWR seem not only plausible but true.


I haven't written much on the LCWR visitation lately. Part of that is because Mother Millea's visitation has been thoroughly covered elsewhere. My other reason is I have been waiting for some information on the other investigation of the doctrinal questions of the LCWR leadership which originated with Cardinal Levada and the CDF. I really believe Mother Millea's investigation is designed to give more support for the Vatican when the hammer comes down from the CDF on the LCWR leadership conference. The following is an excerpt from an NCR article by Tom Fox which is hugely 'enlightening' about the CDF investigation.

This is such an interesting article. It's pretty obvious, at least to me, that the real concern of the Cardinals in Rome, especially the American ones, is that the LCWR demonstrated they have serious political influence. Forget the gibberish about pastoral confusion. That's not the issue. The issue is political influence. This whole thing is about power politics, not Roman Catholic orthodoxy. If there's an orthodoxy in current Catholic politics it seems to be that it's OK to do anything you want for the poor as long as you leave the wealthy and powerful alone. Stay in the soup kitchens and out of Congress like the True Catholics do. Believe it when we tell you your vote is a moral issue over which we have Christ's teaching authority. If we can't trust you to do that we might just put you back behind convent walls where you can't be such a political rival.
What's good for the wealthy and the powerful must be good for everybody the thinking seems to go. That's been pretty traditional thinking for eons and it's been supported by the Vatican for eons. Liberation theology was fine and dandy until it got political and it's politics pointed to the wealthy as the political problem. Communism was way worse than fascism because unlike fascism, communism didn't include a place for the Church and had no intention of sharing the wealth. No quid pro quo with those atheistic godless commies. Indulgences and death bed confessions aren't worth too much in the Communist system.
Since I've gotten a tad cynical I guess I will stop here. Keep up the good work LCWR because you really do speak pastorally and politically for a whole bunch of us.