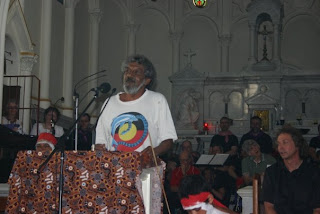 I have previously posted a Eucharistic prayer used by St. Mary's. At the time I posted this prayer there were rumblings that the parish was headed for confrontation with Rome. The following concerns the parish's response to the diocesan bishop who is contemplating closure of the parish or formal excommunication:

MEMBERS of a controversial Brisbane parish have rejected a charge that they are out of step with the Catholic Church in Rome and should close.

The parishioners of St Mary's South Brisbane and their priest Father Peter Kennedy yesterday signed a six-page letter to Archbishop John Bathersby, answering charges he levelled at the popular parish earlier this year.

"St Mary's gives no disrespect (questioning perhaps and sometimes humour, but not disrespect) and prays for none in return," the letter said.

The inquiry into the church was sparked by a disaffected churchgoer, who complained to Rome about unorthodox masses being conducted and a statue of a Buddhist monk being placed in the church. (If this is actually true, that the complaints of one 'churchgoer' will bring on the closure of this vibrant parish, then this is truly a travesty of justice.)

In his August 22 letter to St Mary's, Archbishop Bathersby cited several issues, including the unconventional liturgies and the hierarchical authority of the Church not being respected. "The question for me," the Archbishop wrote, "is not so much whether St Mary's should be closed down, but whether St Mary's will close itself down by practices that separate it from communion with the Roman Catholic Church. (Thank God for the whole notion of self excommunication because it precludes the whole tedious business of actually having to listen to a different interpretation of what it means to be Roman Catholic.)
"The church - which has previously caused eyebrows to be raised for its welcoming of gay and divorced Catholics - was given until today to respond.
Father Kennedy said it would not be appropriate for him to comment until Archbishop Bathersby had fully considered the letter, which outlined the church's good works with unions, women's groups, gay people, indigenous people and victims of abuse from within and outside the Church. (Sounds like this parish deals with the least of us. No wonder Opus Dei doesn't approve, no money in the ministry.)
"Whether or not we agree on everything, St Mary's is part of the Catholic Church," the letter said.
"We are in communion with that very same Church. We ask that you respect our decision to declare ourselves, as you asked, to be in communion with the Catholic Church."
If the church is forced by the Brisbane Archdiocese to close, it would be a first for the Catholic Church in Australia. (and another Vatican brownie point for Cardinal Pell.)
**************************************************************
That St. Mary's is seriously frowned on by the Vatican is hardly earth shaking news. Stage IV spirituality often appears to Stage II institutions to be radical and confrontational when in fact it's the opposite. No, what was interesting to me was the picture of Dennis Walker signing the Sacred Circle Treaty.
I had seen photos of him with Leon Secartero. Leon had incredible stories of how Australian Aboriginals kept in touch with their counter parts in America. Believe me, these weren't stories about the inter net or Fed Ex. Somehow they were able to send messages via traditional musical instruments through Sacred sites on each other's historical tribal lands.
I have spoken with both Natives and whites who experienced the validity of the phenomenon. Dennis Walker's world, like Leon Secatero's world, is not our white world. Theirs is a world based on the application of traditional spirituality and purposefully developed talents of human consciousness which their world view supports and our does not.
One reason our world does not support the development of these human talents is because ours is a world based in hierarchies and theirs is a world based on circles. They can live in a both/and world with the ease in which we live in an either/or world. St. Mary's is then the perfect example of the differences between the two approaches. On the same day the parish is responding to a threat of excommunication from their hierarchical authorities, they are signing a Sacred Circle treaty with Aboriginal spiritual leaders.
This is possible because indigenous spiritual elders look for true spiritual power and not secular power. Spiritual power is always based in concepts of inclusion, equality, compassion and love.
Obedience, one of the hallmarks of Western hierarchical systems, is not a particularly valued trait with in Indigenous Native spirituality's. They value informed consent, which is a different proposition, but can look like obedience. Informed consent is seen as an ongoing process and not an end state. In other words, the messages one may get from Holy One's and ancestors will evolve and deepen as one's spirituality becomes more informed and mature. This is Stage IV thinking.
St. Mary's seems to me to have opted to take the Stage IV path and on the day one door closes on them, another door opens and accepts them. For St. Mary's there is no going back through the old door. It would be akin to an adult trying to fit into clothes from childhood. That's the trouble with the spiritual path, once one goes so far and new doors open, the old ways hold no appeal. The new understandings, the new view, is too enticing, too full of new mysteries and too full of hope.
So rather than commiserate with St. Mary's, I have great gratitude that another group of Catholic people is affirming a much more positive and hopeful world view. I rejoice in their signing of the Sacred Circle Treaty, and where ever Leon watches from now, I know he's rejoicing as well. And finally, it's not that St. Mary's is out of step with Catholicism, it's that the Catholicism of the current Vatican is out of step with them.
Posted by colkoch at 7:43 AM