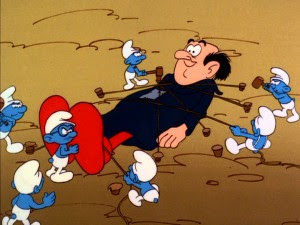 Life as a Catholic can be so interesting. Last week I posted Benedict's enlightened musings on original sin. This week, in celebrating the Immaculate Conception, Benedict seems to be back sliding. I guess that's what happens when Tradition sticks you with something that's based on a literal interpretation of Genesis.

The dogma of the Immaculate Conception affirms that Mary was preserved from "original sin."
"The existence of what the Church calls 'original sin'," Benedict XVI explained, "is, unfortunately, overwhelmingly obvious, if we only look around ourselves, and above all within ourselves. The experience of evil is, in fact, so consistent that it raises within us the question: where does this come from? Especially for a believer, the question is even deeper: if God, who is absolute Goodness, has created everything, where does evil come from?

The first pages of the Bible (Gn. 1-3) respond precisely to this fundamental question, which tests every human generation, with the story of creation and of the fall of the progenitors: God created everything for existence, and in particular he created the human being in his own image; he did not create death, but this entered the world through the envy of the devil (cf. Wis. 1:13-14; 2:23-24), who, rebelling against God, also drew men into deceit, inducing them to rebel. This is the drama of freedom, which God accepts completely for the sake of love, while promising that there will be a son of woman who will crush the head of the ancient serpent (Gn. 3:15)." (Benedict seems to want it both ways. Last week he said of Genesis: "How this happened, the Bishop of Rome contended, "remains obscure."Images have offered explanation, like those of Chapter 3 of Genesis, but "it cannot explain how much in itself is illogical. We can guess, not explain." Unfortunately, this week Benedict says the devil made us do it, because the theology of the Immaculate Conception is based on Genesis.)
"From the beginning," the pope continued, "'the eternal counsel', as Dante would say, has a 'final aim' (Paradiso XXXIII, 3): the Woman predestined to become the mother of the Redeemer, the mother of Him who humbled himself to the utmost, in order to restore in us our original dignity.

This Woman, in the eyes of God, has always had a face and a name: 'full of grace' (Lk. 1:28), as the angel called her when visiting her in Nazareth. She is the new Eve, wife of the new Adam, destined to be mother of all the redeemed. As Andrew of Crete wrote: 'The Theotókos Mary, the common refuge of all Christians, was the first to be liberated from the primitive fall of our progenitors' (Homily IV on the Nativity, PG 97, 880 A). And today's liturgy affirms that God has "prepared a worthy dwelling for his Son, and in anticipation of his death, has preserved her from all stain of sin' (Collect Prayer)."
(I'm not sure what Benedict is referring to here when he calls Mary wife of the New Adam. She wasn't Jesus's wife, she was his mother. He must be speaking symbolically or something.
Worthy dwelling for His son? Is Mary mostly just a perfect uterus with perfect ovum? In anticipation of his death? Why not in anticipation of His resurrection? This is a very confusing illogical paragraph.)

I don't know that there's a better example of how convoluted one's thinking has to be as a Catholic than when it comes to Mary. Even Benedict seems incapable of explaining the various doctrines concerning Mary without recourse to literal interpretations of Old Testament biblical passages.

The genesis story of Eve somehow compels God to envision the perfect woman in order to be the perfect vessel for His perfect son to be perfectly vesseled in so that Mary can then be the New Adam's perfect New Eve. Why can't Mary just be Jesus's plain old fashioned mother?

Here's some of my interesting speculation based on genesis and Mary. Could it be that original sin came with the rib of Adam, and that's why a male was not involved in the creation of Jesus? Could it be that Mary was conceived without original sin because she was female and the fecund earth comes before the seed? (Wouldn't that notion set our sexual morality on it's head.)

Don't forget, those interfering angels were involved in the story of her conception as well. Who knows what else God's messengers were carrying other than messages. Maybe they had XX and XY chromosomal material free of original sin.

All speculating aside, I don't think we do Mary any justice with some of these doctrinal and dogmatic pronouncements which take her way beyond human, making her a caricature of some guy's romantic fantasies about his perfect sexless mother.

The reality of her life as recorded in the New Testament is that of a mother whose son had to have given her lots of premature grey hair. Jesus may have died to redeem us, but his death for Mary had to have been nothing more than a personal hell. Ask any Gold Star mother what it's like to lose a son on behalf of others.

This link is to a brilliant essay on Mary written by Dr. Clarissa Pincola Estes. I love Dr. Estes' writings because she understands, in spades, Native Indigenous spiritual understanding. She knows just how real it all can be, but so can Catholicism be real, when it's unleashed, unencumbered, not corralled.

Here's just a part of her essay, but it spoke volumes to me on what the Church has tried to do with not must Mary, but with all it's gifts of the Spirit:

"I often think of Guadalupe, Blessed Mother, with regard to an illustrated novel by Jonathan Swift that carried a picture of Gulliver, the traveler, pinioned to the ground. Gulliver had become a quasi-prisoner of the Lilliputians, a tiny people only 6 inches high. They critiqued Gulliver, among other things, for being in several ways “too big.” So, they tied him crisscross over all his limbs, and took him down with ropes then wrapped around brass nails and driven into pallet and ground.
The tiny Lilliputians stood on Gulliver’s chest and felt they had tied down the leviathan, the behemoth. But Gulliver just simply sat up ... and all his bonds burst, and all the tiny Lilliputians fell off, tumbling into the grass.
The giant lumbered off with the trivial rope-strings trailing behind. The Lilliputians shook their heads -- as usual -- trying to make sense of the Gulliver figure that was, in form, similar to themselves in body ... but in an entirely other way, so very unlike themselves.
I think many can understand this push to pare down the numinous, the unfamiliar, the unknown. What is truly divine mystery can be overwhelming at first. Yet it would seem in a culture that likes to minimize true magnitude of talents, for instance ... and to magnify the minimus, “the little man,” that is, the flimsiness or meanness or not well- formed qualities of matters ... that it is not only our calling, but our troth, our sacred promise given from the very first moment we ever saw the soul be assaulted in anyone, by anyone ... to untie the Strong Woman now. And forever."

Way too often, the only relationship we’ve been taught/told/offered to have with Blessed Mother ... is either none, through silence about her rich bloodline with us ... or else one in which we must agree to bind her down into a small and handle-able form ... diminishing her, by making her be the quiescent “good girl” ... in phony opposition to having another woman, The Magdalene, be the less quiescent “bad girl.” These are distortions of both women’s origins and gifts. Untie them both, then.
I have listened to some few theologians talking about Our Lady as though she is an appendage to a group of historical facts. Neither is she, as some charge, a superstition. She is not an obedient building made of cement, marble or bricks. She is not to be used as a length of holy wire to bind us all into docility, severing the other hundreds of traits given by God for being beautifully and reasonably human. She is not meant as a fence, but as a gate."