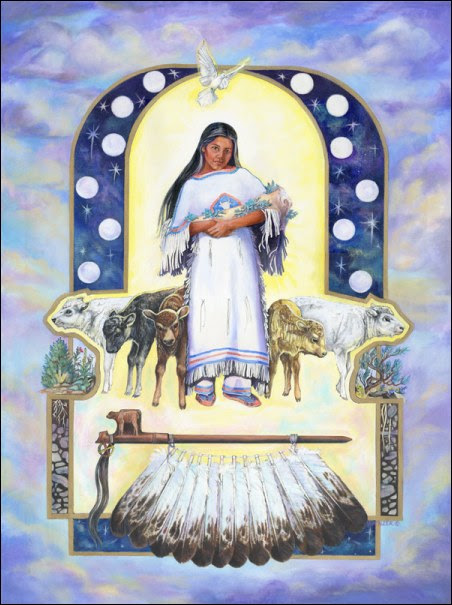 
As I wrote yesterday, today I bring you the Lakota story of the White Buffalo Calf Woman:


Legend of White Buffalo Calf Woman and the Sacred Pipe

The plains people had a religion, given to them long before the Euro-invasion. The religion had spread throughout the land to all people and Nations. It was first given to the Teton Sioux back when Standing Hollow Horn was a chief in the Lakota Nation. This religion promoted brotherhood and peace through the solemn rite of the sacred pipe. It came to the people in this manner. (Some estimates place the genesis of this story about 2000 years ago, well before the horse had been introduced by the Spanish.)

One summer so long ago that nobody knows how long, the seven sacred council fires of the Sioux came together and camped. The sun shone all the time, but there was no game, and the people were starving.

Standing High Hollow Horn, leader of the people, sent two young Lakota men on foot to hunt. The men were returning empty-handed when they climbed a high hill to scan the whole country. In the distance they saw a beautiful young woman who floated as she walked toward them. She was very beautiful, her long hair hanging down, and she wore a fine white buckskin dress.
She was so beautiful, that one young man desired her and said so. The other hunter said that he should not talk so as this was a Wakan woman, a Holy woman.

As the woman arrived she knew their thoughts and she beckoned the Evil minded young man to come to her where a cloud overcame them. When the cloud lifted, she stood alone and at her feet were a pile of bones with horrible snakes crawling over them. (It seems this Holy Woman seeks 'pure' hearts as well. I also note the concept of the Holy Woman and snakes at her feet.)

She then told the man with the Good mind to return to his people and tell them she was coming. When she arrived, the woman carried a sacred bundle that was wrapped in sage. She gave to the people seven sacred rites, among them the rite of the sacred pipe which she carried in the sacred bundle. She gave this to the people and taught them how to use it. (The numerous parallels between Catholicism and the Lakota religion were noticed by both the Lakota and the original French missionaries.)

"With this holy pipe, you will walk the Earth; for the Earth is your Grandmother and Mother, and she is sacred. Every step that is taken upon her should be like a living prayer," she said.

"The bowl of the pipe was made of the red stone. It represents the earth that bears and feeds us. On one side was carved a bison calf which represents the four legged on the earth. The stem of the pipe is wood and represents all that grows upon the earth. These twelve Eagle feathers hanging from the stem mean the sky and the twelve moons. The feathers are for the Spotted Golden Eagle and represents the winged peoples in the air. All these peoples and all the things of the universe are joined to you who smoke this pipe--all send their voices to the Great Spirit."

"This Earth which He has given to you is red, and the two-legged who live upon the Earth are red; and the Great Spirit has also given to you a red day, and red road. All this is sacred, so do not forget! Every dawn as it comes is a holy event, and every day is holy, for the light comes from your Father Wakan-Takan; and also you must always remember that the two-legged and all the other peoples who stand upon this earth are sacred and should be treated as such.…… Wakan-Takan has given you seven days to send your voices to Him."

The woman also told the Sioux about the value of buffalo, women and children. "You are from the Mother Earth," she told the women. " And like the Mother, women bring forth the continuance of life. What you are doing is as great as what the warriors do."

The sacred woman then started to leave the lodge, but turning again to Standing Hollow Horn, she said: "Behold this pipe! Always remember how sacred it is, and treat it as such, for it will take you to the End. Remember, in me is there are four ages. I am leaving now, but I shall look back upon your people in every age, and at the End I shall return.

Through the pipe ceremony, all men would become brothers and peace would exist in them and between them. (Hence the significance of the Woman turning into the colors of the four major races.)

"In the great vision which came to me in my youth, when I had known only nine winters, there was something which has seemed to me to be of greater and greater importance as the moons have passed by. It is about our sacred pipe and its importance to our People."

"We have been told by the white men, or at least by those who are Christian, that God sent to men His Son, who would restore Order and Peace upon the Earth: and we have been told that Jesus the Christ was crucified, but that he shall come again at the Last Judgment, the end of the world or cycle.

This I understand and know that it is true, but the white men should know that for the red people too, it was the Will of Wakan-Tanka, the Great Spirit, that an animal turn itself into a two-legged person in order to bring the most Holy Pipe to His People; and we too were taught that this White Buffalo Calf Woman, who brought our sacred pipe, will appear again at the end of the "world", a coming which we Indians know is now not very far off…"

"Most people call it a "Peace Pipe," yet now there is no Peace on Earth or even between neighbors, and I have been told that it has been a long time since there has been Peace in the world. There is much talk of Peace among the Christians, yet this is just talk. Perhaps it may be, and this is my prayer that through our Sacred Pipe, Peace may come to those peoples who can understand, an understanding which must be of the heart and not of the head alone. Then they will realize that we Indians know the One True God, and the we pray to Him continually…"

"I have wished to help my people understand the greatness and truth of our own tradition, and also to help in bringing Peace upon the Earth, not only among men, but within men and between the whole of creation. "

"We should understand well that all things are the works of the Great Spirit. We should know that He is within all things; the trees, the grasses, the rivers, the mountains, and all the four-legged animals, and the winged peoples; and even more important, we should understand that He is also above all these things and peoples. When we do understand all this deeply in our hearts, then we will fear, and love, and know the Great Spirit, and then we will be and act and live as He intends."

Some days when I start the process of writing for this blog, it's like Christmas. I never know what I will learn or where I will be taken in the numerous Google searches I need to do in order to write some of the articles.

I expected an easy time of it today, because I was very familiar with the legend of the White Buffalo Calf Woman. The article, however, is not my writing, but that of the artist whose painting graces this post.

While navigating her website I came across something I did not expect. It was in the explanation she gave about the genesis of this painting:

"I had planned this painting for two years but when I sat down to painting it, it evolved into something totally different than the planning I had done. As I worked on it, I became aware that Mother Mary was the same personage as White Buffalo Calf Woman. Two years later when I obtained a copy of "Learning Journey on the Red Road" by Floyd Hand, I received validation of this. This piece was a gift of spirit and even the cost of printing was supplied by spirit.

Obviously, I was sort of hinting at this same thing yesterday. It's why I stated I would post this story today. What makes it even more interesting is that the Sundance I attend, Floyd Hand is one of the ceremonial leaders. I had no idea Floyd's thinking ran along these lines.

He and I have a fun relationship. He frequently tries to scare the crap out me, and has offered to monitor me in a vision quest, amongst other things. So far I've failed to accept his invitations, as they seem to lead directly to my dancing in the Sundance, or being scared senseless. Neither of which appeals to me at the present time. Floyd says it's only a matter of time.

He may be right, because now that I've read this, I'm beginning to understand some of his teachings in an entirely different light. The two of us may have a stronger connection than I've thought, one not of this world. This is certainly an interesting time to be alive.

I do know this though, Floyd would agree completely with Dr. Clarissa Estes when she has this to say about the Virgin of Guadalupe, which also involved a Holy woman appearing to an Indigenous man.

"Guadalupe is the quintessential mother... and she does not encourage her sons and daughters who have been broken to walk as weaklings in this world... but rather for broken beings to walk as warriors... who are devoted to speak of her and for her in this world, to enact her holy heart by unfurling the ancient virtues of strength and sheltering, speaking up, standing up and doing... for the sake of goodness." And for the sake of peace.
Posted by colkoch at 9:29 AM