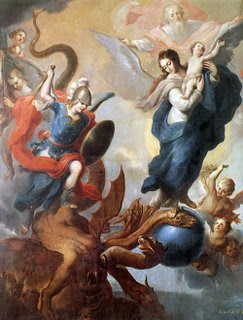 It's always fascinating to me how similar ideas seem to come up simultaneously in posts amongst people who have otherwise limited connections. I found the following post on the National Catholic Reporter website this morning. It's written by a fellow NCR blogger, Sylvester Steffen, whose blog site is called the Second Enlightenment.

Sylvester is a brilliant, compassionate man whose writing is always worth reading. In this post he makes the same point a commenter did on this blog yesterday. Patriarchy has advanced on the exploitation, domination, and abuse of all things feminine. In the case of Catholicism Sylvester makes the point that our sacramental system has become divorced from the truth which gives it any power at all. It's become representational, rather than natural. Another way to put this is our sacramental system is in our heads, not our hearts, a product of mental abstraction and not concrete realism. It is not one with nature, but separate and 'above' nature. It is too left brained and imbued with the Spirit of Domination:

A persisting “heresy” (choice) of Roman Catholicism, of Christianity in general, has been to institutionalize and over-emphasize representational reality and alienate the community of believers from natural reality, thereby enabling the waste, sacrilege, of Natural Sacrament.
In his presentation before the Theology of Land Conference (Collegeville, MN, 1985), Walter Brueggemann enunciated the critical wrongdoing of Western Christian culture, namely, the sanctioned exploitation (rape) of land and women, and the inseparable connection of land and women: (I would say sanctified, not just sanctioned.)
“Adam, that is, mankind, has a partner and mate, adamah, land. Humankind and land are thus linked in a covenantal relationship, analogous to the covenantal relationship between man and woman …unfortunately, in our society we have terribly distorted relationships between man and woman, between adam and adamah, distortions that combine promiscuity and domination.… Likely, we shall not correct one of these deadly distortions unless we correct them both”. [Bernard Evans & Gregory Cusack, Editors, “The Theology of Land”, 1987, The Liturgical Press,
In the ecclesiology of Roman Catholicism, Representational Sacrament has been theologized and emphasized to the point that the faith required of the faithful values Representational Sacrament (liturgy) above the reality of Natural Sacrament.
“Reality” endures in Natural Sacrament (the Naturalis Sacramentum Ordinis) which is sacred by reason of divine instance, i.e., the presence of divinity as expressed in natural prevision and provision, and celebrated in understanding Divine Providence. Grace and authenticity come from fidelity to nature, to female reality, the ground-state of all vitality. The profound degradation of nature is a failure of human prevision/ provision, of “religious” disregard and exploitation of nature, of women.

The rape and prostitution of ecozoic nature (femininity) are about exploitation, for profit, of nature’s vital resources, what are “favors of female gratuity”. All the fruits of natural vitality are fruits of female sexuality, not a gratuity belonging to patriarchal dominion but to the vital wellbeing of the communities of interdependent life.
If priesthood isn’t about service to universal Order in Natural Sacrament, it misses the point of service responsibility and functions as a demon of cultural ideology and social mischief. Unless institutional priesthood attends first to symbiotic fidelity in the Order of Natural Sacrament, it defeats its true-to-life sense of purpose and responsibility. The obsessive, male myopia of dominion theology has lost its common sense of purpose and conscience. (The Native concept of warrior, as expressed in warrior societies, is all about service to the feminine, and to the future, as expressed in living children.)

*********************************************************
It's interesting that in Catholic angelic theorising, Michael the warrior is always portrayed in service to Mary---the warrior in service to the feminine principle. This concept has been effectively destroyed and buried in traditional Christian theology, in favor of twisted concepts of complementarity in which the feminine exists to serve the masculine through her fertility and generosity. This notion of complementarity is not supported by many mystics or spiritual visionaries. It is also not supported in any definition of clerical ministry given in the New testament by Jesus himself. In fact, Jesus takes on the role of the feminine at the Last Supper and specifically states the apostles are to be servants to the servants.
Jesus's notion of complementarity recognizes that while women are in service to their children, humanity's potential future, men must be in service to women--servants to the servants. It's about service, not domination.
Indigenous spirituality on the other hand, places the feminine front and center, recognizing it's the energy on which humanity is dependent for it's survival. This is the exact reverse of Western Christianity which more often that not blames the feminine for introducing sin and all matter of other evil. The mysterious divine feminine is to be controlled, exploited, or made subservient to male authority.
This last is why every single Marian apparition must pass the test of orthodoxy before official sanction is given. It's also the reason Joan of Arc met her fate. In her trial, when she was asked what was more important obedience to the Church Triumphant, (the voices of Michael and her Sainted mentors Catherine and Margaret), or the Church Militant, (the Bishops and Pope), Joan made the mistake of saying obedience to the Church Triumphant. So she, amongst thousands of other female mystics and visionaries, met her fate on the pyres of the Inquisition.
The scars left by the witch persecutions are still felt by spiritually talented women who are terrified of what will happen should they come out of their 'spiritual/psychic' closet and confess to 'knowings' and experiences which transcend normal reality. The Inquisition may have happened centuries ago, but it's message is still very very powerful and relevant for today. When feminine ability, whether it be fertility or spirituality, threatens patriarchy it is exploited and/or persecuted.
Whether the Church likes it or not, the fact is, women far more so than men, stand in between this reality and any other reality. This is consistently depicted in placing Mary between heaven and earth.
Men and women are complimentary, but not in the sense in which the Church tries to teach it. It is a complementarity more analogous to the differences between Quantum Physics and Newtonian physics. Newtonian physics does not exist without the creative potential of the quantum reality. In other words quantum potentiality is the uterus which births tangible reality. Women are far more connected to this truth, than men.
It's why Michael serves Mary, and in this picture, a Mary who is standing on the earth and holding a child. They are both fighting a serpent. The serpent known as the Spirit of Domination.