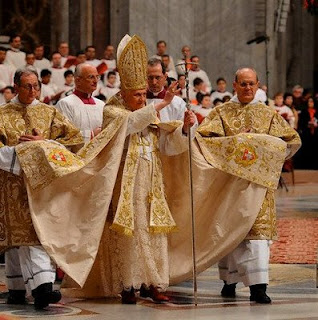 VATICAN CITY (Reuters) - Pope Benedict said on Monday that saving humanity from homosexual or transsexual behaviour was just as important as saving the rainforest from destruction.
"(The Church) should also protect man from the destruction of himself. A sort of ecology of man is needed," the pontiff said in a holiday address to the Curia, the Vatican's central administration.
"The tropical forests do deserve our protection. But man, as a creature, does not deserve any less."

The Catholic Church teaches that while homosexuality is not sinful, homosexual acts are. It opposes gay marriage and, in October, a leading Vatican official called homosexuality "a deviation, an irregularity, a wound".
The pope said humanity needed to "listen to the language of creation" to understand the intended roles of man and woman. He compared behaviour beyond traditional heterosexual relations as "a destruction of God's work".
He also defended the Church's right to "speak of human nature as man and woman, and ask that this order of creation be respected".

He turned his attention to those people who call themselves in Italian “gender” or “transgender” — a broad term that includes anyone who doesn’t identify entirely with their assigned sex and can include homosexuals, bisexuals, pansexuals and others.
“What’s often expressed and understood with the term ‘gender’, is summed up definitively in the self-emancipation of man from the created and the Creator … But in this way, he lives in opposition to truth, he lives in opposition to the Creator,” the pope said.

Here is the response from the International GLBT human rights commission:
“In a season in which the immorality of genocide, lawless governments, lust for money and power and the destabilization of the world’s economy are destroying the lives of hundreds of millions around the world, the Pope’s obsessive focus on gay, lesbian and trans people who simply seek the right to live and love is out of touch with what humanity needs right now from its religious leaders.”

I have to ask as well, what does the Church think it's doing with this obsessive focus on GLBT humanity. This year alone Benedict has said gay rights represent the single biggest threat to civilization and now he is comparing gays with polluting human ecology and equating that with saving the rain forest.

What is really generating this over the top hyperbole? I still maintain it has everything to do with feminism and not the 'gay agenda'. It has to do with repopulating Europe and America with obedient Catholic families where the man serves as head of household and is tasked with bringing his child-wife and children to the throne of entrenched male power. This is sometimes referred to as 'bringing his family to Christ'.

I suspect we are going to see more of this strategy of defining a 'human ecology' coupled with green interests. It's designed primarily to convince younger generations, who truly are concerned with ecology, of the TRUTH of the one size fits all 'traditional' concepts of male/female complementarity. Benedict may run into some problems convincing our eco youth that overpopulating the planet with the 'products of procreative sex' is really eco friendly. I could make a case that God understood population density issues so well, that he created a class of people who would not contribute much to the problem. Just as he did in the animal kingdom.

In this sense, encouraging gay families does more to save the Rain Forest than encouraging unlimited family growth and therefor is far more in tune with God's Natural Law.

I have to admit I burst out laughing when I read his more specific notions on the transgendered. As he liturgically parades in lace trimmed skirts and yards of gold silk, who is really going to take that notion seriously.

Gender bending is prevalent in all the theology around the priesthood. It has to be if the theology really seeks to protect an all male priesthood while claiming this priesthood represents both the divine feminine and divine masculine. If human ecology is all about sexual complementarity then you have to have gender bending in the theology of priesthood in order to fill those requirements. We certainly do.

Make no mistake, gays are taking the brunt of the bashing, but it's really women who are the target. This Christmas I will spend time praying for the women of the world who are systematically being raped as a war strategy, forced into pregnancy, beaten by their husbands, stoned to death in the Islamic world, and dieing by the droves from AIDS and pregnancy related complications.

I will also be praying for their children who are too many times born into dismal circumstances not of their choosing, being used as cannon fodder in too many wars, traded as chattel on the sexual slave market, exploited as workers by corporations, and left to rot in orphanages when they aren't as 'cute as puppys'.

So are gays really the number one source of pollution in the ecology of humanity? I think not.
I will take my lump of Christmas coal from Benedict for what it's worth, and burn it on a consecrated altar in an effort to purify it, for that's exactly how lumps of coal becomes diamonds.

PS, I'll be taking the next two days off, and want to extend a truly holy and peaceful Christmas to all who read this blog. May peace, love, and joy enter all our hearts in this time of changing energy and upheaval. As the Archangel Michael says to me every time he's going to blow my mind, I offer you his words. "Be not afraid".

The following is a Christmas message from Cardinal Maida of Detroit. It really could have been inspired by Michael, who has a yet to be explained, strange interest in the city of Detroit. It's also much better than Benedict's offering. Namaste.
Christmas 2008 will undoubtedly be quite different for most of us. Given the economic uncertainty of the times and the fact that many have lost employment, and even their homes, we will be celebrating in a way that is more simple and modest. In fact, for many, there will probably be little reason for celebration and for some, perhaps no opportunity for celebration at all.

No matter what our circumstances, every one of us feels somewhat overshadowed by fear about things we cannot control. We wonder where the future will take us – individually, in our families, and as a society. Our metro area and the automobile industry are going through a time of major transition, causing every one of us to take a second look at who we are and what we do.
More than ever, we need to reflect on the hope-filled message of Christmas. Again and again in the Christmas Gospels, whenever an angel appears, consistently the message is the same: "Do not be afraid.…" Mary heard those consoling words at the Annunciation. Joseph heard those same words several times in St Matthew's account of Christ's birth.

Aged Zachariah was given the same advice as he and his wife, Elizabeth, were about to receive the surprising gift – and challenge – of the birth of a son, John the Baptist. As I mentioned at the outset of the column, the shepherds who first heard the Good News were also commissioned not to be afraid.
Fear is a natural human reaction; it is instinctive for humans to be afraid of the unknown or things that are unpredictable and unfamiliar. Every manifestation of God should make us feel a bit off-balance, overwhelmed by the surprising gift and mystery of God's presence and commitment to us in sending His own Son. We need the right kind of fear – "fear of the Lord," not fear of human forces. "Fear of the Lord" – one of the gifts of the Holy Spirit – means a loving respect for the wonder, majesty, and mystery of God – all powerful yet humbly very near to us.
As we grapple with fears within our hearts and fear around us, we need to be ever-more sensitive to the voice of the Holy Spirit trying to calm us from within, assuring us that not only will we survive but we will indeed grow closer to God as we give up any false pride or illusive desire for control. We need to set aside human fears and embrace fear of the Lord.
The Christmas story reminds us of the way God chose to show His abiding love for us – by sending His Son to dwell among us at a particular point in time and to a particular group of people. He came in such a hidden way that no one recognized His presence. The message of Good News was first proclaimed to shepherds, people who were social outcasts and, therefore, not acceptable or credible witnesses.

Yet the Lord entrusted to them the Good News and commissioned them to share it. Why did He pick shepherds? Possibly because shepherds had to be people of great courage, spending all night through every season guarding and protecting their flock from wild animals. Shepherds were attentive and patient, humble and strong – an excellent combination of traits, the same qualities we need in the midst of these challenging times.
The Christmas message has a very intimate and personal quality to it, but at the same time, the Christmas experience is a public and communal event, a manifestation for all to see, a mystery for all to encounter and share. We need to express our faith in public ways – participating in the Mass and the Sacraments, singing Christmas carols, putting our faith into action through visiting the sick and reaching out to the disadvantaged, proudly displaying our Christmas creche and so forth. As we do these things, however modest or simple, we are helping to proclaim a hope and a joy to our brothers and sisters in these times of darkness and anxiety.