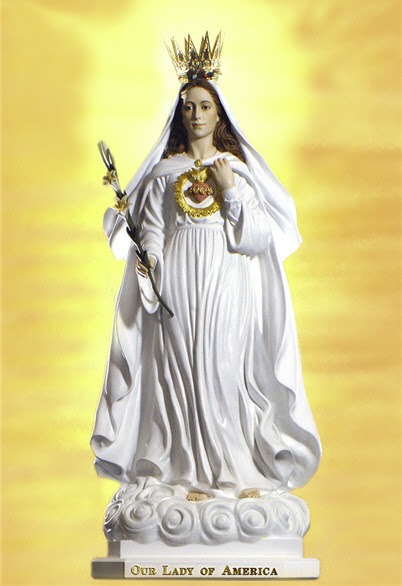 I was given a head's up by a reader about an American nun, to Sister Mary Ephrem (Mildred Neuzil), of the Precious Blood Sisters (1933-1979), who had a series of Marian visits in which Mary requested she be referred to as Our Lady of America. These visitations started in 1956 in Rome City, Indiana. This title was to be distinct from Mary's title of Empress of the Americas referenced in her visitations to Blessed Juan Diego at Guadalupe, Mexico.

As with other personal revelations, Catholics are under no obligation to credence any Marian visitation as dogma or doctrine unless the Vatican says so. Such has been the case with the Marian dogmas of her Immaculate Conception, and Assumption. Although the visitations of Sr Mary Ephrem received the imprimatur of Bishop Paul Liebold of Cincinnati, there hasn't been to this date any Vatican recognition of the apparitions. Bishop Liebold died in 1972 after serving as Sr. Ephrem's spiritual advisor since 1957. You can read more about this Marian apparition at this website .

As with most Marian apparitions, if you take the time to read the entirety of Mary's messages, you will find many warnings about the pending disaster facing mankind if we don't repent and mend our ways. But a closer reading will lend itself to some interesting differences. Mary seems to be stressing a personal internal conversion and connection with herself and her son, not necessarily obedience to an external authoritarian source. And it's all about forgiveness, compassion and love---'pure' compassion, forgiveness, and love, not the kind tainted with any self interest.

While researching Our Lady of America, I came across another contemporary visionary. This one happened in Nicaragua, to a peasant rancher Bernardo Martinex in 1980. It's a great story about a man overwhelmed with his experiences. Although this apparition is virtually unknown, it does have the approval of the local bishop.

In these messages Mary stresses the proper praying of the rosary, developing faith with in families, and, again, the importance of love and forgiveness: "Do not be grieved. I am with all of you even though you do not see me. I am the Mother of All you sinners.
"Love one another. Forgive each other. Make peace, because if you don’t make it, there will be no peace. Do not turn to violence. Never turn to violence.

In one part of this story Bernardo asks Mary if she wants a church built. Why wouldn't he, it seems to be a standard request. Mary answers:
No! The Lord does not want material churches, He wants living temples which are yourselves. Restore the sacred temple of the Lord. In you is the gratification for the Lord. Love each other. Love one another. Forgive each other. Make peace. Don’t just ask for it, make peace. From this day on do not accept even one cent for anything." (By the way, this never accepting one cent for any healing or other intervention is standard practice with truly spiritually gifted healers--well, at least not asking for anything.)

These latest Marian visions are quite fascinating. At Fatima, we were told to pray the rosary, and make First Saturdays, but in Nicaragua Mary is stressing not just doing it, but HOW you do it correctly, with intent and focus. At Fatima we were told to pray through her for Jesus's intercession, especially in Russia. That peace on earth was a process of petition and repentance, but now she is saying, "don't just ask for it, make peace" with in ourselves and with each other.

She's telling us we are no longer her dependent children, we are active participants in our own future. What we believe, and how we act on those beliefs are powerful and really do effect things. Like any really caring mother she is telling us "Don't expect me to give you what you won't work for yourself, what you won't be yourself. Beggars can't be choosers."

She's also telling us the rosary is not just a prayer device, it's a powerful spiritual tool when used and prayed correctly. It's the Catholic version of the Native American's peace pipe and should be treated with the same respect and honor with which Native's treat their ceremonial pipes. Praying the rosary is truly a spiritual ceremony. Sometimes I think Catholics forget that or don't realize it. It's not an exercise to be taken lightly or rotely. (Tomorrow, I'll write about the Souix legend of how they received their pipe and pipe ceremonies. It's pretty fascinating.)

To end this, I really did find this research exercise to be rewarding and want to thank the reader who gave me the heads up on Our Lady of America. One last thing, Archbishop Raymond Burke is a big supporter of our Lady of America and would probably disagree with some of my take on both of these apparitions, but that's the nice thing about personal revelation. It's personal.