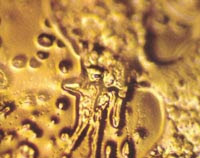 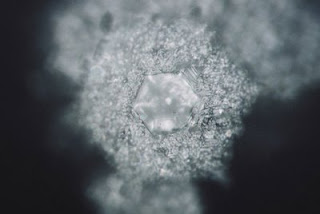 The photo directly to the left is of a water crystal formed after tap water had been exposed to the Martin Luther King speech, I Have A Dream.
The photo above it, is of a water crystal formed after being exposed to the words, "You make me sick, I want to kill you." This link is to a website which explains how these photos are taken and why this phenomenon happens.
I have written in the past about the work of Dr. Masaru Emoto and how his work seems to prove that the crystalline structure in water is effected by human thought and consciousness.
Higher forms of thought and consciousness create more complex, organized, and beautiful crystals. In one sense these crystals, in that they are individually unique, can be considered visual representations of complex thoughts and feelings. Just like petroglyphs.
As can be seen from the above photos, aggressive hateful thinking causes disorganization and ugliness. This crystal didn't even form, and so it looks like microscopic mud.
Jesus taught about both the power of love and the power of exclusion, hate, exploitation and other forms of negativity we lump under the word sin. He wasn't kidding. Our thoughts and actions have a profound influence on the make up of our reality at sub the atomic level and those levels will then manifest in the greater reality. Love has real power, just like gravity. Hate has real power, just like magnetic attraction.
I wish leaders in religious institutions would meditate on these two photos. Some of them may just come to the conclusion that their fundamentalism, which defines 'others to exclude' in order to foster their own sense of righteous superiority, is doing great harm to those 'others', to themselves, and to the society in which we live.
Martin Luther King had a dream. It was a beautiful dream. It forms beautiful crystals. Jesus had a vision, and his vision was based on a core truth of this reality. Love does make the world a better place. It's not some ephemeral notion, it's a real force in how our material reality manifests.
The Kingdom Jesus spoke of is within us. It's in our very fundamental quantum structure. To find it we need to go within ourselves and our own consciousness. We need to use to power of love to change the ugliness inside. We need to actively seek conversion to a Faith in the power of love. It's what Jesus asked us to do. It's why his essence and Mary's essence is still so much a part of our material reality. Make connections, go with in, trust in Love, and change happens. Dr. Emoto's water crystal photos show it's all true.
For our reality, and how it's organised and manifested, God, the Creator, is Love.
Posted by colkoch at 11:05 AM