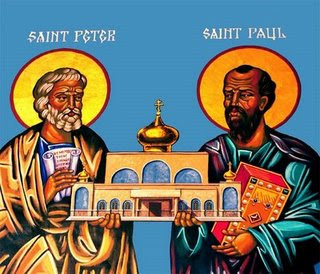 I've been studying St. Paul and the early battles between the Jerusalem Church of James and Peter, and the Pauline Church of Antioch. It seems some things never change.

This original dispute centered on whether or not converts to Christianity had to accept Jewish law, including male circumcision. This was felt necessary in the Jerusalem church of James and Peter, which tended to see Christianity as another Jewish sect. Paul and his 'law free' church felt one could be a member of Jesus's church without accepting Jewish customs and laws. Paul did not see Christianity as another Jewish sect. Jesus taught a relationship with God which fulfilled and transcended Judaism.

It's hard to tell from Scripture how or if this was ever settled. Paul seems to have been sort of exiled from Antioch, taking his version of Christianity further afield. In the end Paul won out. It seems his message of inclusion and equality held more appeal for gentiles.

I've often thought about the significance of Paul's conversion. Why would Paul be singled out as the Resurrected Jesus's hand picked apostle? Why did Jesus feel he needed another apostle? Did Jesus think His message was getting lost amongst the rules and regulations, and so he stepped in to correct the mistake?

He couldn't have picked a better example. As Saul, Paul was a Pharisee and no friend of the nascent Christianity. After his conversion he rejected strict law observance in favor of a spiritual understanding of law, and again, was no friend of nascent Jewish Christianity. Paul radically changed, but he was still a thorn in the side of the Church. Apparently there was something about the core of Paul's personality that was essential to Jesus and his mission for Paul. All that single minded focus demonstrated by Saul, was also core to Paul, and in his obstinate determination to hold to his point of view---even against Apostles that had actually experienced the living Christ and theoretically had more authenticity than Paul. It's all very interesting.

But now we come to today's example of how the more things change the more they stay the same. The same battle between the law believers and Apostolic authority, versus those who believe in the spirit of the message and a more law free church, is being played out in Brisbane, AU with the parish of St. Mary's.

I've posted about St. Mary's before, and I'll keep posting about St. Mary's because their situation serves as a real life example of the apparently endless conflict between Stage II thinking and Stage IV thinking. Just as St. Stanislas Kostka does in St. Louis, St. Mary's presents a challenge to the Vatican. Essentially both parishes are asking Benedict if they can 'walk his talk'.

The first link is a letter written by Archbishop Bathersby to St. Mary's asking for clarification on the parish's part about certain doctrinal issues, and the second link is St. Mary's response. It's fascinating reading. It really is shades of Jerusalem vs Antioch.

History shows us on whose side the Spirit was moving in the first 'law vs spirit' battle, and I have hope history will repeat itself. For those of you who may be new to this blog and don't quite get the references to stage II and IV spirituality, try this link for a short and succinct description of all four stages of spiritual development.
Posted by colkoch at 8:22 AM