From Torture To Truth 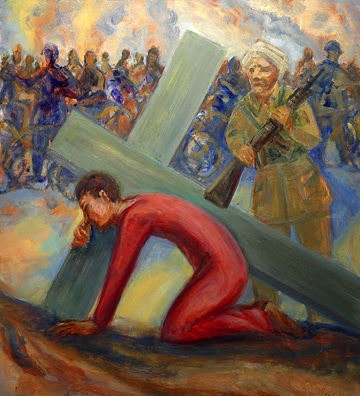 The following is the story of Dianna Ortiz, an Ursuline nun from New Mexico, who worked with Indigenous Guatemalans in the eighties during the Reagan administration. This is an edited version of her statement. The full statement can be read here.

I don't suppose it comes as any shock that Sr. Ortiz's torturers and their boss, received training from the US School of the Americas located at Fort Benning, Georgia. This is the school which is picketed by thousands every November. This is the same rally which was the brain child of that 'heretical' priest, Fr. Roy Bourgeios. This is also happens to be the school on whose board of directors sits Roman Catholic Bishop Robert Morlino, a Bush appointee.

Sr. Ortiz's story is incomprehensible, but I'm certain, we will hear similar stories from detainees of Guantanamo and other Black Ops hideouts. As was the Reagan CIA, so is the Bush CIA.

Barack Obama made campaign promises to close both Guatanamo and the School of the Americas. He needs to deliver. He also needs to convene a special prosecutor to investigate personal culpability on all levels of the Bush Adminsitration. Our torture policy is not just a black eye for our definition of ourselves as a moral democracy, it has also been estimated to have been a major factor in the deaths of upwards of 2000 of our soldiers in Iraq and been the single biggest recruitment tool for our terrorist adversaries. Torture was not just a moral disaster. It was also a strategic and tactical disaster.

There are many aspects of Sr. Ortiz'z story which serve to illustrate the level of moral bankruptcy which our government functionaries will sink to in order to protect their and their administration's abuses of power.

Blaming the victim, using spurious claims of lesbianism, challenging the veracity of her testimony, claiming national security issues, are typical strategies of powerful men caught in traps of their own making.

Protecting the institutions which feed them is the primary mission of the bought and paid for party apparatchik. We've seen this whole thing played out in the Catholic hierarchy in the sexual abuse crisis for the last seven years. When the pursuit and protection of power becomes the sole focus of an institution, there are no rules of decency. There is no perception of the 'other' as worthy of human compassion.

Lest one think the Vatican is somehow different, think again. In their opposition to the French and European Union call for the world wide decriminalization of homosexuality, the Vatican is willing to allow for the torture and imprisonment of homosexuals in 85 countries in order to protect their notion of 'traditional marriage'. In eight of these countries men are executed for the crime of being homosexual. It seems homosexuality has replaced communism as the biggest threat to entrenched Catholic interests.

Cardinal Miggliore, the Vatican ambassador to the UN, even goes so far as the justify this imprisonment, torture, and execution of homosexuals as necessary in order to protect the state.

"If adopted, they would create new and implacable discrimination's," Migliore said. "For example, states which do not recognize same-sex unions as 'matrimony' will be pilloried and made an object of pressure," Migliore said. (Pilloried? isn't that kind of like tortured? How awful for these states.)

He also states that the Vatican in no way wishes to imply that they agree with any discrimination against homosexuals. Just like Guatemalan officials wished us all to know that they weren't torturing anyone, or disappearing anyone, or working with our CIA in these efforts, and the Bush administration wanted us to swallow their hogwash about not being engaged in torture---until the pictures came out. Until the truth came out.

In the end, Truth always wins out, but like the story of Sr. Ortiz proves, it won't come out unless it's forced out by people committed to a cause which goes beyond themselves, and this forcing doesn't involve torture. It just involves implacable integrity. Something sadly lacking in both the hypocritical Bush administration, and the Church's hypocritical stance on homosexuality.